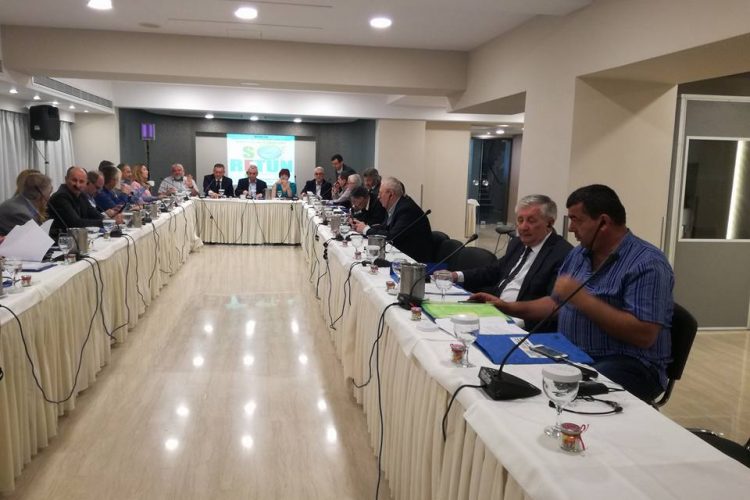 Dt: 19.04.2018 Athens, Greece
Meeting of the Executive Committee of the Network RETUNSEE.
In this meeting was reported about SOLIDARITY AND ACTION DAY dedicated by RETUNSEE Network for Albanian Oil Workers.

Below you have the speech of the Secretary General of FSPISH, Mr. Taf Koleci, at this meeting.

The Executive Committee of RETUNSEE19 of April 2018 Athens, Greece,

The speech of General Secretary of FSPISH Mr. Taf Koleci

First of all, I want to transmit our warmest and sincere greetings from all of the colleagues from Federation and the Colleagues from the Confederation, especially from the Albanian oilmen, supporting us in this tough struggle for all of us. Just like we have informed you during this period of time, we are facing with a problematic situation in our oil sector.  The start of all the problems has been since the plant privatization in 2007. After that the plant faced with all those hardships.

But what about the workers?

The issue is, that after the bankruptcy of any company, like it is written at the Labor Code of Albanian Republic, it has to pay firstly the workers for their done work, and that is the reason that the owner didn’t accept that the company has bankrupted and didn’t pay the workers, lying them day by day.

During this time we have looked for worker’s rights and we have protested for that case. The workers, as was mentioned on the presentation, after the protest took a backward wage, but remain without paid their whole done work and their health and social insurance.

We are asking to the Albanian Government to get a serious partner to give the plant in concession, or the best way is to nationalize it. We are convinced that only then would give one concrete solution to this vital problem, not only for the Oilers, but for the whole economy of the country, too.

We are talking  with the Government and with the interested part, that has been interested to take the plant on the concession,  protecting our members rights, aiming, conform Albanian laws and in accordance with Albanian Labor Code, signing of the collective bargaining and strictly position to its points defending the worker’s  rights.

Actually, those days, it’s achieved a tripartite agreement between Government-Employ ( the interested part to re-open the plant) and the Employee ( represented by Trade Union Federation of Industrial Workers of Albania), signing that all workers ( for the moment jobless) will be part of this company. This agreement, is powerful for 6 months, and after 6 months will be signed the collective bargain with the “ Byllis Energy” company.

Also, we have opened a trial to the previous company for the unpaid wages and health and social insurance, of one year. I think that we are in the right way to win the case, as we have win until now 80% and remains and 20% and then we will win the full case.

I, the head of Trade Union Federation of Industrial Workers of Albania, like the biggest Federation on industrial field in Albania, thank you once, on behalf of all us for your solidarity and your support to our struggle for Albanian Oilers.